Almost
from the beginning of the scriptural account of God’s saving work in history, God’s
exhortation for his people to “be holy” stands as a dominant thread running
through the entirety of the biblical story. From the giving of the ten
commandments to Moses on Mount Sinai to Jesus’s gospel proclamation that the
kingdom of God has come near to his reminding his followers that they are to be
salt and light to the world around them, the primary focus of God’s redemptive
work in the world has been to gather and form a distinctive community to bear
witness to his intentions for the creation; not a religious people, nor a pious
people, but a holy people, a people set apart, a people whose life together, devoted
first to each other’s flourishing and happiness and ultimately to the
flourishing and happiness of every one of God’s creatures, is declared by God
to be the beginning of his coming reign on earth.
The
twentieth century author Flannery O’Connor once quipped, in a somewhat skewed echoing
of the fourth Gospel, “The truth will set you free. But first, it will make you
strange.” And so it goes with holiness. To be holy is to be whole; it is to
flourish; it is to be blessed. But it is also to be different, to be set apart
– not taken out of, but distinguished from – a world that is largely alienated
from God, and thereby characterized by selfishness, greed, and blind ambition,
and so filled with violence, injustice, and suffering. God’s people are called
to be not like this, but instead to inhabit
a peculiar, countercultural way of life, what Saint Augustine called an altera civitas, a “different city,” a
community whose generous “politics of love” are often wildly opposed to the
self-seeking “politics of security” that pervade the fallen creation.
Today’s
gospel text is about wealth, and at no point is the opposition between the logic
and politics of the kingdom of God and that of the kingdoms of this world more
conspicuously evident than in their respective attitudes toward the acquisition
and use of wealth. Jesus spoke often of this opposition, reminding his
followers and those others who gathered to hear him of the profound dangers of
a life devoted to the pursuit of riches. “It is easier,” he said, “for a camel
to go through the eye of a needle than for someone who is rich to enter the
kingdom of God” (Matt. 19:23-25).  In
this part of the Sermon on the Mount he throws the contrast into sharp relief,
echoing both the first commandment and the oft-repeated truth that the real
object of our worship, our real god, is whatever we value most, the thing toward
which we most direct our time, our energy, our resources, and our attention. “For
where your treasure is,” he reminds us, “there will your heart be also” (6:21).
“No one,” he continues, “can serve two masters…. You cannot serve God and
wealth” (6:24).
What
was true of life in the ancient near east of Jesus’s day is at least as true,
perhaps more so, of life in our own world today. The vision of the good life
promoted by the broader society we inhabit is based almost totally on the relentless,
single-minded pursuit of wealth and the things it can be used to acquire. An
entire industry is dedicated to forming us in this way, committed to shaping
and multiplying our desires, set on making us want more and more and more, making
us people of chronic, insatiable, and fundamentally disordered desire – people the
world refers to as “consumers.”  It is
consumption, we are frequently reminded, that drives our economy and enables
our prosperity, and we are for the most part happy to respond positively to
those who encourage us for the sake of the economy to work harder and buy more.

Will Miller Award to Robin Bohanan 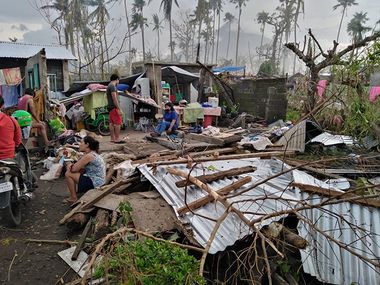 Giving Thanks - the Orbin's story 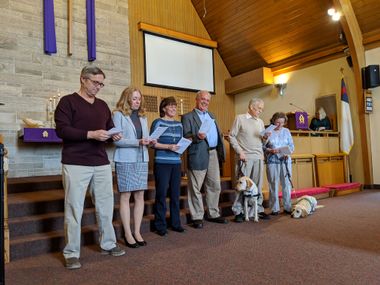