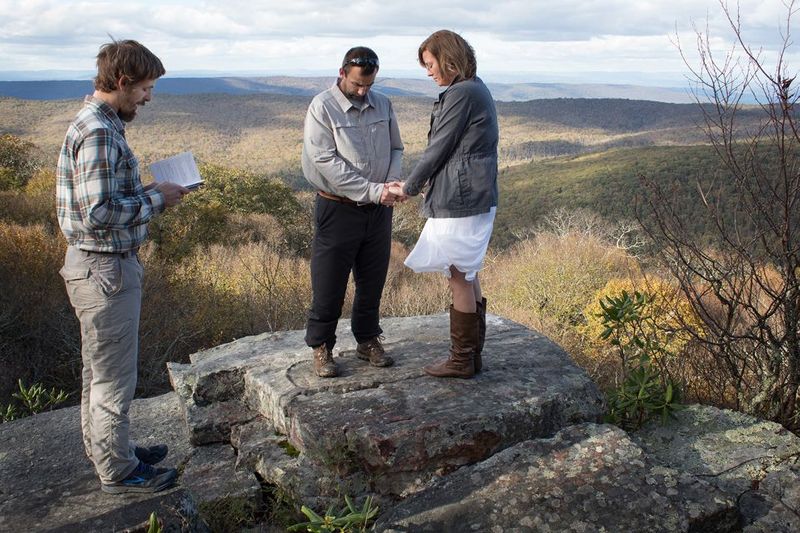 The Rev. Matt Hall conducts a renewal of wedding vows service for Nick and Stephanie Houle atop Sugar Run Mountain, just off the Appalachian Trail near Pearisburg, Va. Hall serves as a United Methodist chaplain appointed to the trail community.

For most United Methodist itinerant pastors, changing churches can be a period of anxiety. But once the Rev. Matt Hall finishes his appointment now, he may welcome a pulpit that doesn’t move every day.

Hall is the fifth chaplain sent to hike the Appalachian Trail by the Holston Conference, which includes East Tennessee, northern Georgia and southwest Virginia — also a significant portion of the trail. He began his trek at Mount Katahdin in Maine on June 21 and is on track to finish his nearly 2,200 miles of ministry at Springer Mountain in Georgia around Nov. 19.

“My goal is to eat Thanksgiving dinner with my family,” Hall said.

The chaplain position was born out of a ministry to thru-hikers — those attempting to hike the entire trail in one stretch — that two United Methodist churches in Bland County, Virginia, began 16 years ago. The conference has been sending chaplains to thru-hike “the A.T.” since 2013, but Hall is the first to be officially appointed to the trail as clergy. The previous four chaplains have been commissioned laity.

“It’s more of an appointment to a community; that’s no different from a typical church appointment,” Hall said. “I’m here to serve spiritual needs as they arise, but a lot of my ministry is just simple service.” ...

His presence as a chaplain also generates conversation. “Pak” and “Ibu,” hikers from Oklahoma, asked about the nature of his ministry. Pak shared a story about growing up United Methodist in Texas and participating in the U.M. Army, a Texas-based mission service agency for youth and young adults.

Hikers typically adopt trail names given to them by others. Hall’s trail name is “Trigger” — a reference to both Willie Nelson’s famous guitar and a term Hall learned while in recovery from substance abuse.