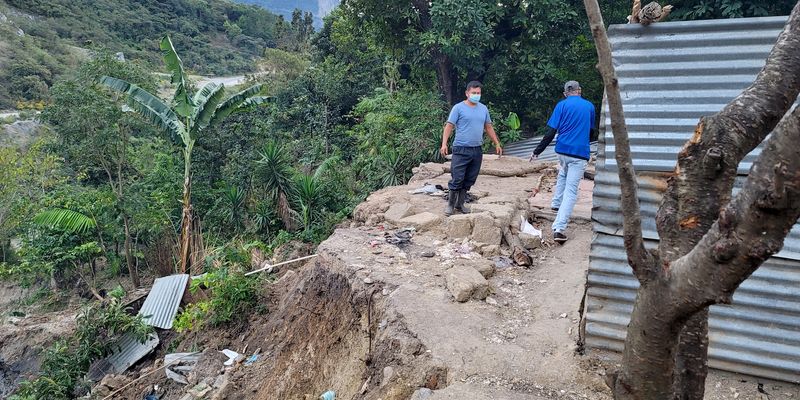 Maximo (left) inspects what is left of his house on a hillside in Cunen, Guatemala. A landslide caused by Hurricane Iota in November left little behind, but his family got out safely. PHOTO: COURTESY IENMPG

Maximo was attending his mother’s funeral service in November when he received an urgent call from his neighbors in Cunen, Guatemala. His house on the hillside was gone after a landslide wiped it out during Hurricane Iota. It took him hours to reach the site because debris blocked the road. But his pregnant wife and three children had gotten out in time.

María de Lourdes Ramírez Mroczka, a United Methodist missionary working with the National Evangelical Primitive Methodist Church in Guatemala to distribute emergency aid in Cunen, was amazed by Maximo’s deep faith as he was never without a smile. “You don’t argue with God,” he said. “The Lord gives, the Lord has taken away. I praise the Lord because my family is safe.”

The 2020 Atlantic hurricane season produced 30 named storms and 13 hurricanes – the most ever recorded in a season, according to the U.S. National Oceanic and Atmospheric Administration. Several of the worst Category 4 hurricanes made landfall in Central American countries, affecting some of the poorest populations in Latin America. From August 2020 through January 2021, the United Methodist Committee on Relief released a series of emergency grants to Methodist and ecumenical partners to aid emergency relief efforts across Central America.

Recovery from this year of disasters will take years, but currently, emergency relief is still ongoing, with COVID-19 cases and lock-downs complicating operations. Roland Fernandes, general secretary for Global Ministries and the United Methodist Committee on Relief, reiterated UMCOR’s commitment to the region.

“These emergency grants, spread out across six countries in Central America, provided emergency food, building supplies and COVID-19 protection for some very vulnerable people in deeply affected communities,” Fernandes noted. “Through these grants, UMCOR is developing relationships with new partners to build a foundation for further cooperation and response.”