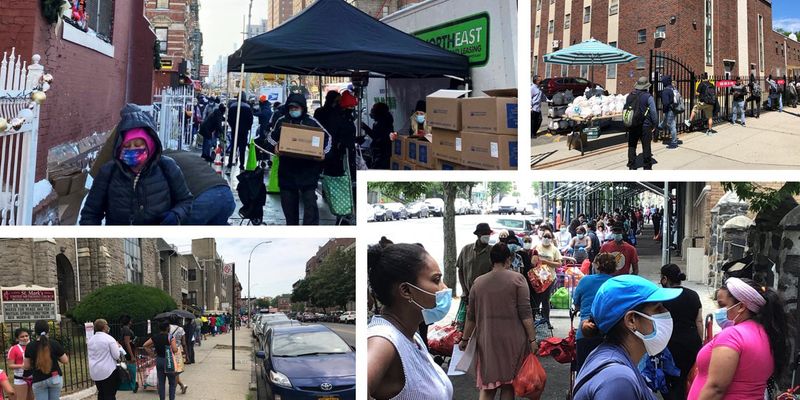 2020 was a difficult year for many New Yorkers. Above are food lines outside United Methodist churches (clockwise from top left) First Spanish UMC in East Harlem; First UMC in Flushing, Queens; St. Mark’s UMC in Brooklyn; and Calvary UMC in the Bronx. PHOTOS: COURTESY OF THE CHURCHES NAMED

A few grants and strong connections opened UMC food pantries and kitchens in key underserved areas of New York during the pandemic.

When COVID-19 cases started to rise in New York City in March 2020, state and city restrictions effectively shut down the city, causing job losses for many people, with the highest rates of unemployment experienced by communities of color. Within weeks, paychecks ceased, savings evaporated and no jobs appeared on the horizon. As the need for food rose exponentially across the city, nearly 75% of food pantries closed, unable to meet the need.

At the same time, churches saw rental income dry up overnight and congregational giving decrease. Yet, more people than ever needed food. Clergy and laity in the New York Annual Conference found themselves asking the same question the disciples asked of Jesus in Matthew 15:35.

Where are we to get enough bread in the desert to feed so great a crowd?

And so, as Jesus directed, they started their ministries with what they had, seven loaves and a few small fish. ...

The Rev. Wesley Daniel at Calvary UMC in the Bronx was compelled to action by what he saw on the streets. Calvary is a predominantly African American, Caribbean American congregation. “With pantries closing, people were roaming the streets to try to find food.”

“We’d been trying to figure out how to partner in the community,” Daniel continued. “Fortunately – and unfortunately – COVID gave us an answer. We started by offering whatever we had in the church. Soon, we realized this work demanded more than we were able to offer.”

Calvary contacted Grace Episcopal Church in the Bronx, which had an active food pantry. Grace was able to supply food boxes to Calvary on a weekly basis and gradually increased its distribution.

Calvary connected with Salem UMC in Harlem for additional food boxes and later with Trader Joe’s. In addition, Calvary identified several families needing rent assistance, which the conference arranged to pay with funds from the Human Relations Day grant.

“Volunteers are the backbone of the operation,” Daniel noted. “We have a church van and a church bus we converted for food hauling. We don’t foresee this ministry being finished anytime soon. It is such a necessity in this community, with its people of all nations.”