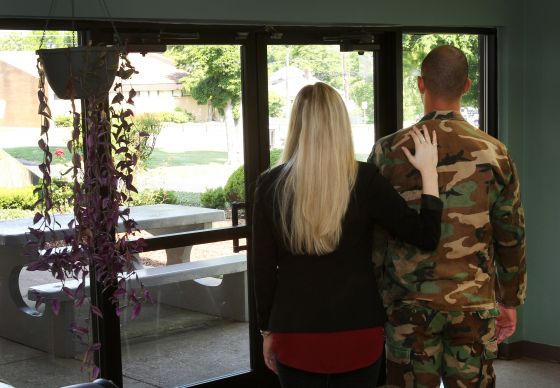 Article by Kathy Gilbert.
They are the “hidden heroes” ––1.1 million parents, spouses and friends serving as caregivers for post-9/11 military veterans.

They are overwhelmed, under-trained and mostly unsupported in their unexpected lifelong roles as caregivers.
The RAND Corporation, a nonprofit research institution, just released the largest-ever study of military caregivers and found that those taking care of veterans who served after 9/11 are younger, usually employed outside the home and are more likely to care for someone who has a behavioral health problem. …
The Rev. Myron Wingfield, an executive at the higher education and ministry board, said the report reminded him of a couple he knows who are caring for a wounded son.
“I was struck as I listened to a father tell of the extraordinary measures he and his wife have undertaken to care for their wounded and recovering son.  He will never recover fully — his wounds were too severe — but I could see where he had acquired a soldier’s courage and resolve.
“His parents were uncommon in their abilities to care but, now into their second year of providing round-the-clock primary care, the father and mother are coming to terms with the fact that they cannot sustain the effort without additional assistance. Their only time alone with each other is one date night a week. The whole story was a reminder of the network of wounds created by soldier’s wounds.”

Check out the full article!

Light and Hope to Florida

Grief and Sadness over the holidays