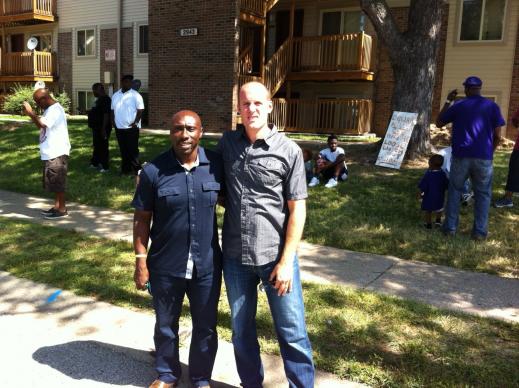 Photo courtesy of the Rev. Matt Miofsky.
The Rev. F. Willis Johnson (left), pastor of Wellspring Church, a United Methodist congregation in Ferguson, Mo., and the Rev. Matt Miofsky, lead pastor of The Gathering, a multi-site United Methodist congregation in the St. Louis area, stand together near the site where Michael Brown was killed in Ferguson, Mo.
By Heather Hahn; Aug. 15, 2014 | NASHVILLE, Tenn. (UMNS)
Since Aug. 9, the Rev. F. Willis Johnson has devoted his entire ministry to fostering peaceful — and meaningful — responses to the police shooting of an unarmed black teenager and the violent tumult that followed in Ferguson, Mo.
The shooting of 18-year-old Michael Brown led to four days of clashes between police in military-grade riot gear and angry crowds.
The United Methodist pastor led prayer vigils, helped with cleanup, met with community leaders and comforted protesters. Other United Methodist leaders answered his call to help a community in pain.
Read the full article, with additional pictures.
missionstory