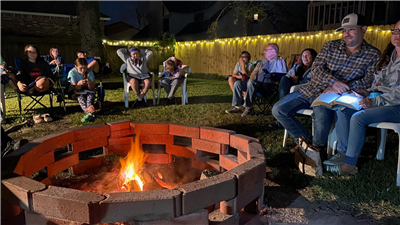 ... First, as shared by the rest of global society, the rumors of the novel coronavirus soon became the onslaught of COVID-19— redirecting if not halting life for this Lake Charles community in March of 2020. Five months later, just as Louisiana’s second spike in COVID cases began its crucial descent, hurricanes Laura and Delta made their landfalls with barely a month between their winds. The pandemic-preoccupied world watched as devastation multiplied for Louisianians and multi-billion dollar property damage accompanied the loss of even more precious lives. ...

“When there’s a disaster,” Rev. Chris Hyde says, “people need to be connected more than ever.” And connection is what the congregants of University East-turned-The Bridge in Lake Charles have found.

Chris, in an interview with Sam Hubbard (which will air this week on the Office of Congregational Development and Transformation’s official webcast, NP2Cast) explains that as the city faced blow after blow, the people of University UMC were doing all they could to keep the main campus afloat while questions about the future of its new plant began to surface. Would their eastside building (once intentionally opened to the community 7 days a week and now damaged alongside 97% of Calcasieu Parish) persist through the pressures, or would momentum cease before the church could reach that significant 5-year church-plant milestone?

What would soon be realized was that these questions weren’t quite creative enough for Chris and his leadership. Instead of wading the waters of “survive or crumble,” they began to dream: What did the first church look like? What if we took everything apart and tried something new? What will the church be on the other side of all this? What do we want it to be?

The result of this imagination? They call it The Bridge, and it is now a growing network of backyard house-churches designed to offer space for the over-churched and un-churched. Those who want to explore their relationship with Jesus through more than just an hour on Sundays, those who have been hurt by institutional religion, and those who (along with 60% of the U.S. population) live their lives outside of sanctuaries are finding community here.

“It started off with dinner,” said Chris, painting a picture of the group that has gathered in his backyard over the last several months. Those who arrive by personal invitation alone (The Bridge has no webpage or marketing) gather for a potluck dinner on Monday nights followed by a devotion that focuses on spiritual intentionality and practical application of the topic. The liturgy of The Bridge is not accompanied by a bulletin directing announcements and prayers. Rather, their casual and approachable post-dinner discussion begins with a simple question: How have you seen God at work this week? Somewhere, John Wesley—who opened his own small group gatherings with the question How is it with your soul?—is smiling.